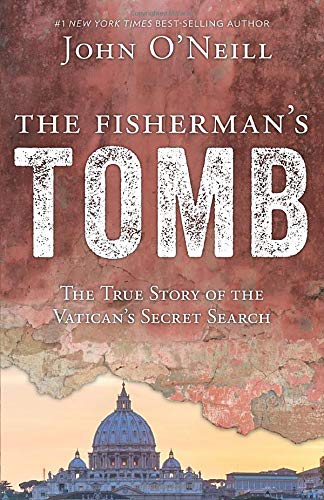 In 1939, workmen found an early Christian grave beneath the Vatican

Margherita Guarducci, the unlikely heroine and brilliant archaeologist, showing the niche in the wall where St. Peter’s bones were originally found.

Tombs of the Valeri, found beneath St. Peter’s Basilica during the excavations.

A secret quest with an improbable hero

The hero of The Fisherman’s Tomb is a wealthy Texas oil man who bankrolled the expedition at the secret request of Pope Pius XII.

Praise for The Fisherman’s Tomb

What a cool book!

“The Fisherman’s Tomb tells the story of the discovery of the tomb and bones of St. Peter under St. Peter’s Basilica, combining risky excavations, oil discoveries and cataclysmic explosions in Texas, the intrigues and adventures of World War II, petty jealousy among Vatican apparatchiks, scholarly diligence and carelessness, amazing heroism — plus, above all, confirmation of the truth that Jesus made Peter the rock upon which he built his Church. What a cool book!”

“The Fisherman’s Tomb is a gripping archaeological detective story stretching back two thousand years, a true tale of religious veneration, papal risk-taking, and scholarly feuds. It’s all told in fascinating and well-documented detail by John O’Neill, who reveals a behind-the-scenes American connection to the excavations that brought Saint Peter’s bones to light.”

Drama and adventure and Providence

“This is one of Christianity’s many great stories of faith, hope, and trust. It’s drama and adventure and Providence, and John O’Neill here gives it the kind of loving treatment it deserves, one clearly born of his own dramatic encounter with faith, hope, and trust. Inspired by the witness illuminated in The Fisherman’s Tomb, may every reader grow in these virtues, through Saint Peter’s intercession.”

— Kathryn Jean Lopez, Senior fellow at the National Review Institute and editor-at-large of National Review, coauthor of How to Defend the Faith without Raising Your Voice